Help this game reach its goal

GHOST ORBIT is an analog role-playing game about things breaking in space. You can expect to encounter gross neglect, runaway fires, explosive decompression, labor riots, hostile xenoforms, and maybe literal ghosts. The players take on the role of IWW Union Spacers trying to survive the day everything went pear-shaped. We play to find out how the spacers survive, and what they lose in the process.

GHOST ORBIT uses six-sided dice. You'll want two in a matching color and a third in a color that stands out. We recommend two black and one red die.

The Intake Manual and Union Rep Guide PDFs are formatted to be printed as half-letter booklets. Print them using your machine's booklet setting or take them to your local copy shop.

Word Documents with only the text of the Intake Manual and Union Rep Guide are provided for use with screen readers.

Sticky Bunton: If you enjoy compact, rules-light games, have an itch for a more “realistic” sci-fi, and want to emulate media such as Alien or Event Horizon, then this is absolutely your game.

Kai Poh: Everything is made of hit points, and everything breaks in Ghost Orbit. Your spacesuit. Your skills. Your mind.

In order to download this game you must purchase it at or above the minimum price of $5 USD. You will get access to the following files:

Support this game at or above a special price point to receive something exclusive.

If you want to grab GHOST ORBIT but are experiencing financial hardship of any kind, please grab a community copy.

Every time GHOST ORBIT is purchased, and for every $5 tipped, a copy will be added to the community copy pool.

I have a question: in the Crisis Pay section, there is

Do you get your vitals refilled AND are paid a bonus for it?

It's pay spacers receive for surviving a crisis. The bonuses for Psych, Soc, and Med are paid if a Spacer ends a crisis with a totally filled Calm, Face, or Vigor track, respectively.

So, for example, if a spacer totally fills their Vigor and gets physically incapacitated they get paid out 10 bonus scrip.

This is end of adventure stuff. The final payout. If you're running a scenario that lasts multiple sessions, it only pays out at the very end.

If you're running a follow up scenario with the same characters, they would completely clear their vitals and spend the scrip as they want. But, GHOST ORBIT is really intended for one shots. Crisis Pay is mainly there as a sort of score keeping mechanism.

Aaaaah I get it now! Thank you!

Its a rules light and pretty  free form game allowing for a lot of freedom. I've always been a proponent of a few well thought out rules which govern everything instead of a massive book of highly specific rules, so I'm happy about that.  The core mechanic of gambling stats on a roll, with the stats being "Used up" on bad or middling rolls is an effective one and I like the inclusion of the ability to gamble more for a higher chance of success.

So this game lacks any kind of setting and is pretty lacking in examples as well. There's no example character sheet for instance,  a scant handful of examples of items, augments, and the like, and basically nothing in terms of a setting.  Now obviously this is because the game is supposed to be a sort of semi-universal semi-realistic scifi ruleset that can be used for every setting from Firefly to Event Horizon.  The issue is that nothing about this system really cements it in the scifi role. You could rename a few things and this could be a fantasy medieval system.  The loosey goosey nature of the system makes it feel somewhat insubstantial and the lack of hard examples only makes it feel more bare bones.

This doesn't make the system any less functional, of course, it just somewhat undermines the feeling of the rules and makes them harder to get into. With no boundaries to bump up against in terms of what is or isn't reasonable, and with very few examples, it can be hard for players or even GMs to really understand their place in the world.  Really puts a lot of load on the GM for balancing and world building on the fly.

Unrelated to that, I do feel a bit disappointed in how the game handles its stat gambling system. See, you gamble your stats (or aspects of the world if it makes sense)  and if you lose or don't succeed perfectly you mark off boxes next to each stat. Once those boxes are filled, you cannot use that stat again till you do something to "heal" it.  This is a good mechanic in its way but I'm disappointed that its a 100% to 0% transition. The stat doesn't "Degrade" as it lowers, it just stays at full power and then suddenly vanishes.  Someone can fail "Face" rolls repeatedly but will still be considered the paragon of society until they fail just one more and become an outcast in an instant. Its just kind of an odd thing to have slow stat loss without any In universe  sign of that degradation.

The bad:
This is where we get into some of the issues of a Freeform system like this. So the game has you create your character by choosing name, appearance, etc as well as Training, Items, and augments. About two and a half of the player handbook's 6 pages of rules are dedicated to these things, how they work, how to upgrade them, how to get more, etc.  And, as far as I can see after reading and then rereading the rules, they have absolutely zero mechanical use.  They appear to be entirely fluff and flavor.

Now, you're probably gonna argue that having these things opens new possibilities in terms of the options available to you. You cannot shoot an alien with a shotgun you don't have, after all. And with some things this is fair, But the problem is that, mechanically, you don't need that shotgun most of the time.  If two players were trying to kill an alien and one had a shotgun and the other had their fists, the actual rolls would be identical; they would both just roll 2d6 and see what happened.  The best you can really argue is that A. the player could bet the integrity of the gun instead of his own stats  or B. That the Gm could just say no to the player without a gun.  The first isn't really covered in the rules and the second is basically saying "We have no rules for this so you're not allowed".

What this means is that, mechanically at least, players are really only differentiated by their stats, which are very few in number and all start off basically the same as well. It really limits player differentiation from a mechanical standpoint and makes it all about the flavor and fluff of those items and augments and such. Which, to some people, is not going to be an issue, But I believe that a player's individuality should be a blend of both fluff and crunch, that the rules and mechanics of the game should reinforce and legitimize the player's unique aspects in ways that are reflected in the nitty gritty of the game.   After all, if my mining robot turned moral philosopher is mechanically identical to an orphan child soldier of the lunar wars, it kind of undermines player choice.

And of course there is the big one here: DEATH.  The game admits that it has no hard and fast rules for death, that running out of vigor isn't death, and that what qualifies as a "Deadly" situation is up for interpretation.  I think this is ok in some games but in games where there's supposed to be a high risk of death, leaving the circumstances of death up to a subjective choice on the part of the GM is a dangerous move.  It basically puts the onus of choosing when the player dies entirely on the GM, which is fine as long as the GM and Players all get along and are totally happy to allow a character to die when it seems appropriate. But many Players are not going to be happy about losing a character and will argue against it.  When you have a hard, objective system to decide when death occurs, like HP running out, its not really something that can be easily argued against. But when things are left opened ended,  players can take death as an unfair or arbitrary choice and it can cause tension in the group.

Its a decent system with a good core mechanic but the lack of mechanical integration of player choices combined with its generic "universal" nature leaves it feeling very insubstantial.  However, these are problems that could very easily be fixed and if they are, the game will be a solid rules light system for space shenanigans.

A clarification on the Death rules. The vagueness may be a problem of how I framed it, and definitely something to consider if/when I tackle v. 1.2. But the actual rule, with some added emphasis is:

A spacer is only dead for sure when their Vigor fills up and they are left behind by their companions to face the threat, helpless.

The intent is that the Union Rep doesn't kill characters, their companions leave them to die.

That said, again, I definitely couched the rule in a way that might be too vague, and it's going on my list of tweaks for the next time I open up the hood.

The more traits you have, the more you have to  wager instead of your precious vitals ; specifically on the red die in addition to what you already risked.

Since the red die is the only way to improve a roll (in the absence of traditional pbta  attribute scores), I'd argue that the mechanical use of equipment, augments and training  is actually very tangible. 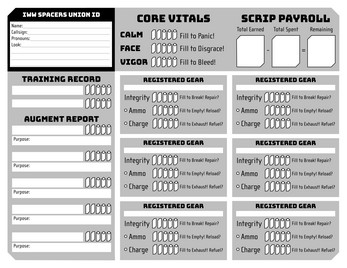